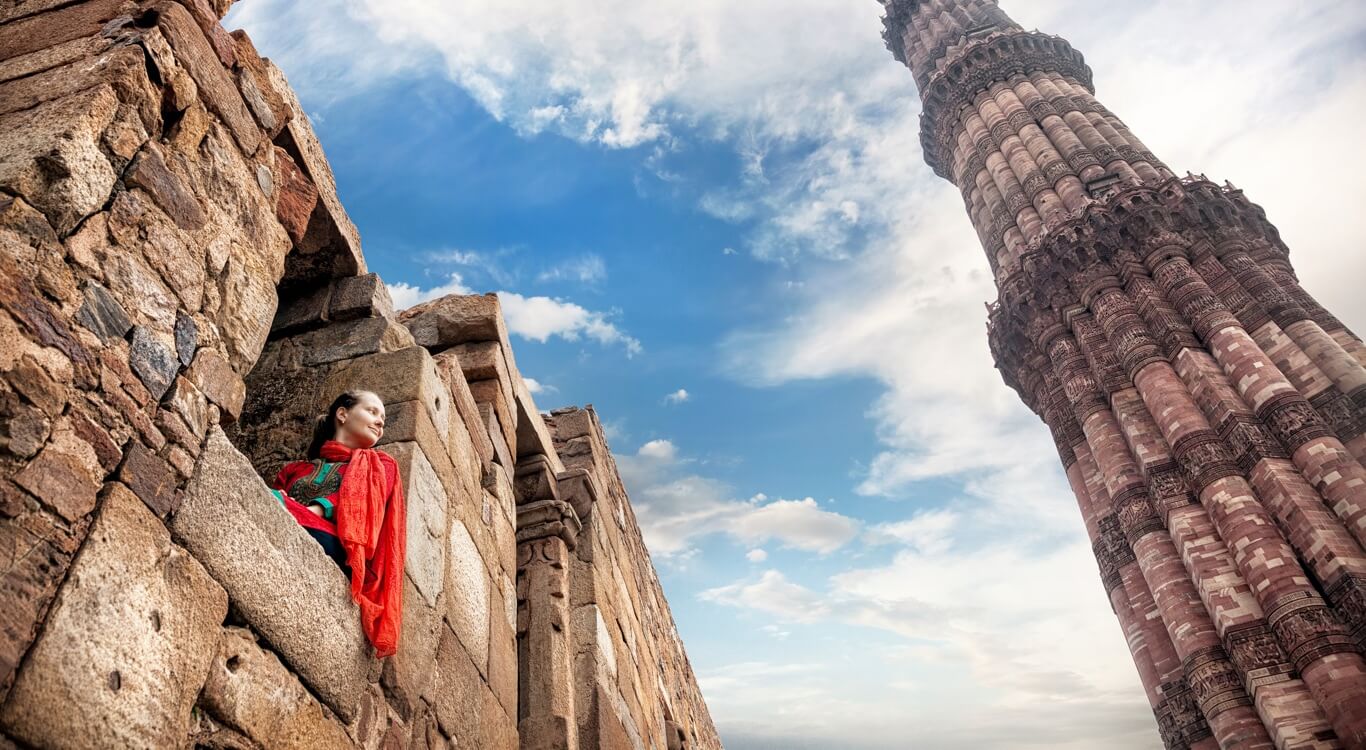 Expert tips on living in India

#ExpatLifeInIndia isn’t simple. They often have a difficult time adjusting to the surroundings. But once over the initial culture shock, living here in India is a memorable experience.

Located in South Asia, India is the seventh largest country in the world. It’s the world’s second most populated country and is the largest democracy. It has many different religious and ethnic groups. The most followed being Hinduism, which comprises of around 80% of the population followed by Islam 12%, Christianity 2% and then there are other religions such as Sikhism, Buddhism, and Jainism.

The country is known for its culture, customs and mannerisms which are very different from those in the west and, at first, might seem overwhelming to foreigners.

India is a rapidly developing country with ample job opportunities in several industries. This results in increased work opportunities not only for locals but also for expats. 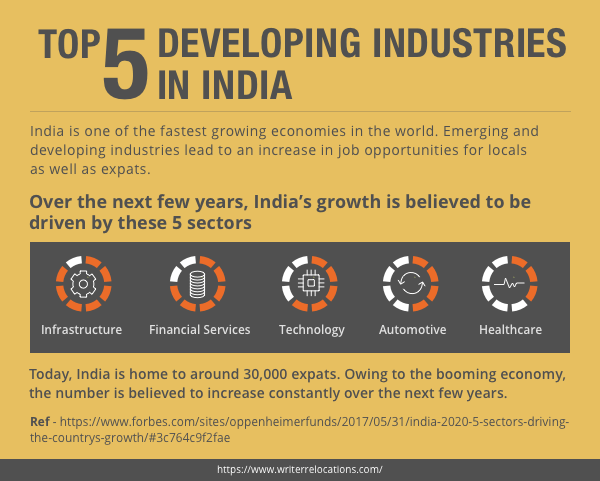 India’s expat community are in a wide range of professions such as teaching, marketing, sales etc. They are also artists, spiritualists, CEO’s and executives in international corporations.

As the opportunities to relocate to India are increasing, here is an informational guide to make your transition seamless and easy. 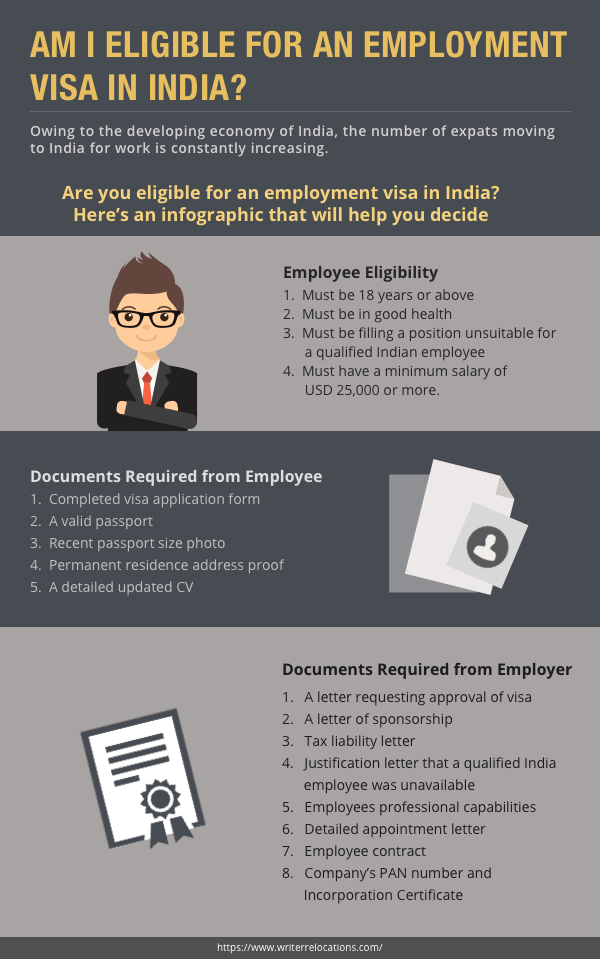 There are mainly 3 types of visas - A tourist visa, employment visa and business visa. People may apply for one of them depending upon their purpose of visit.

Writer Relocations provides visa and immigration services for India along with many other countries across the globe. You can get in touch with us for further assistance.

Expats may apply for a tourist visa when they simply want to visit a friend or when planning a vacation. They are generally granted a six-month visa. Most foreign nationals can apply for their visa at a VFS Application Centre in their home country.

A few countries are also granted visa on arrival under “Tourist Visa on Arrival Scheme” started by India to promote tourism in the country.

Foreign nationals may apply for an employment visa when they are hired to work for an Indian registered organization or when they’re transferred internally by a company to India. They are granted this visa only when they produce a proof of a job offer. They may also have to produce a proof of their professional qualification.

This visa is granted to those who wish to start a business in India. It’s generally issued for a period of six months.

An expat has to register with Foreigners Regional Registration Office if their visa is valid for more than 180 days. This is one of the first things they need to do as they require to register within 2 weeks post their arrival. The documents expats will need to include are application forms, passport copies, passport-size photos, a copy of their visa, a letter of guarantee from an Indian host or sponsor, and proof of residence.

India is a vast country and the weather varies from region to region. However, there are 4 main seasons: Summer which lasts from March to May, Monsoon from June to October, Post-monsoon from October to November and Winters from November to February. Cities like New Delhi face an extreme climate of 40 to 45 degree celsius in summer whereas in winter the climate drops to below 10 degree Celsius. Cities like Mumbai face relatively less extreme climate but a very heavy rainfall. 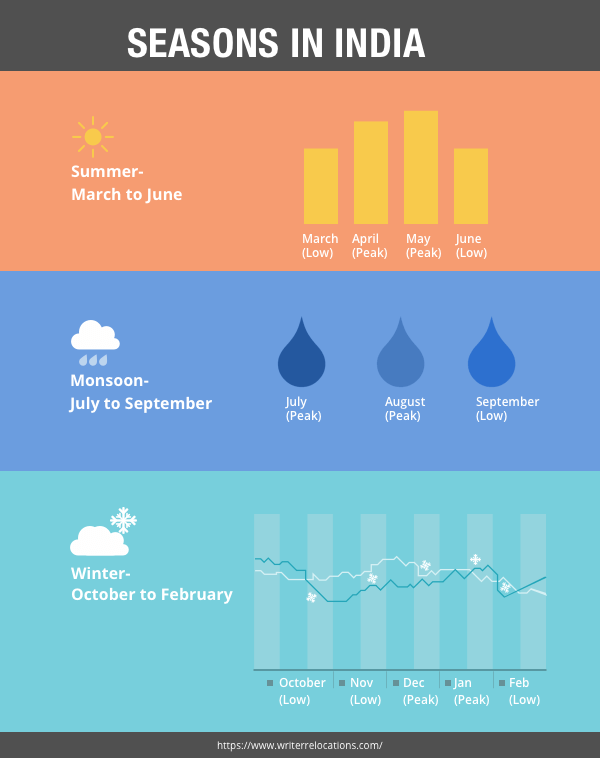 Hindi is the most widely spoken language in India. About 30% of Indians nationwide speak Hindi. As India was a British colony English is one of the official languages here and is commonly spoken at work. There are more other regional languages spoken in different parts of India. Also, due to tourism shopkeepers, drivers also have started speaking English.

The cost of living varies from one city to another. Cities like New Delhi, Mumbai are much more expensive as compared to Bangalore and Kolkata. According to Mercer Cost of Living Survey Mumbai and New Delhi were ranked at 57 and 99 respectively, out of 209 cities studied which make them quite costly.

But Majorly expats have a good standard of living here, as they can afford servants and chauffeurs unlike in the west. Also, the cost of most things, including entertainment, education, housing, and food is lower than that in western countries.

Ideally, your employer should arrange your stay. But, if this isn't the case then you have to look for a property agent who could help you find a house. Once you shortlist a property don’t forget to make a lease agreement with your landlord. They will often try to convince you to unofficially rent the property. But insist on a proper agreement as you’ll need them for future paperwork. Landlords may also ask for a security deposit, which could be of about two or three months’ rent. An Agent's commission could be half a month’s rent.

As per their stay in India during the financial year, Expats fall into three tax categories which will determine their taxable income. 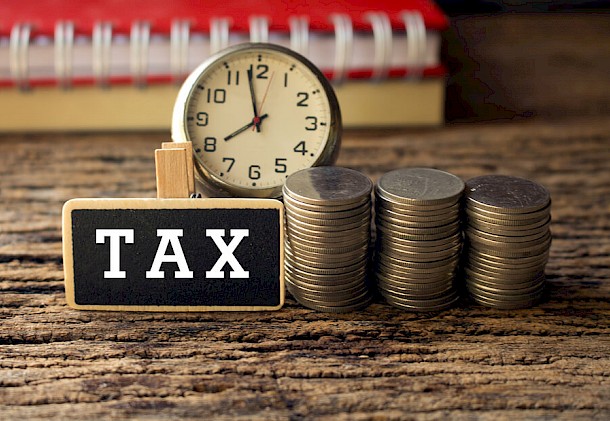 The three categories are

How to determine which category they fall into?

If the individuals stay does not satisfy the above requirements then they are considered as a non-resident. Alternatively, if by the above rule, individuals prove to be residents than they are further categorized as ROR or RNOR

To determine whether the individual is Resident and Ordinarily Resident (ROR) or Resident but Not Ordinary Resident (RNOR), we need to apply the following rule.

Has been a NR in India for nine out of ten years preceding that year, or

Has been outside of India for 729 days or less during the seven previous years preceding that year.

Foreign nationals who work in India at a stretch are considered RNOR for the first two years and ROR from the third year and will be taxed in India on their worldwide income.

Also, depending on whether they fall into RNOR, ROR, NR category accordingly their portion of income is taxed.

India is one of the largest economies in the world. Especially the IT sector in India is a fast-growing industry, creating a lot of job opportunities. Even though thousands of students graduate every year, there is still a lot of requirement of skilled professionals in booming sectors like biotechnology, pharmaceuticals research, manufacturing, aeronautics and consumer electronics. This gives expats the opportunity to work in India. On the other hand, foreign companies are outsourcing work to India creating senior level opportunities for expats.

Due to change in climate, expats tend to fall sick more often. They are suggested to always carry their own drinking water, as having water outside can lead to an upset stomach or fever. They should also be careful with eating out. Indian food is very spicy and oily compared to most other cuisines. Foreigners might take some time adjusting to this, and the sudden change in taste of food might result in falling sick more often.

Public hospitals in India are slowly, but rapidly developing. Private hospitals, too, have grown in the last few years.

Finding public transport in India is not really an issue. People mostly use taxis, auto rickshaws, public buses and local trains as their mode of transport in cities. Introduction of metro trains and radio taxis in most major cities has made travelling a lot more convenient and simpler these days.

With increasing job opportunities, authorities are constantly looking for better ways to develop and thus make lives simpler for locals as well as expats.

Trusted by over 5 million people, you can rest assured that moving with Writer Relocations will always be a stress-free experience.

Have you ever visited India? Are you an expat already living in India? What is it that you like the most about life in this country? Do share your thoughts with us in the comments below.

Relocation Process Steps: A Guide to the Stages of Moving to a New Place

Listing the Highest Paying Countries in The World

A Guide on How to Live in India as an Expat

A Guide on the Best African Countries to Live In

Get Your Free Move Quote
5 important tips for a st...
All about Moving to a Cou...